Acute Sinusitis Infection
What Causes it?

The most common cause if this two-way restriction is swelling of the mucous membranes that line the sinus and nasal passages (see Sinus Symptoms).

There are a number if factors that could cause injury to this lining, including:

There are also a number of less common factors that can cause blockages and restrictions, for instance: 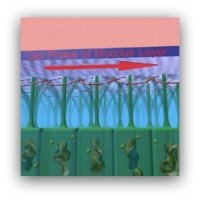 Nasal cilia under a microscope resemble a forest of tiny hair-like growths sprouting through the mucous membrane.

Cilia help clear mucus, bacteria, and dust from the sinus cavities and nasal passages by constantly sweeping back and forth like sea anemones in a tidal current.

What is the Difference Between Acute and Chronic Sinusitis?

Acute sinusitis is a rapid onset and short but severe sinus infection that lasts up to four to eight weeks.

Chronic sinusitis is a long-lasting and recurrent sinus infection. An attack that lasts more than eight weeks or keeps coming back is classified as chronic.

Sinusitis that lasts between 4 and 12 weeks can be subdivided into the "subacute" classification.

Symptoms of chronic sinusitis are usually less severe than those of acute sinusitis, however this condition may lead to complications requiring prolonged treatment and sometimes surgery.

The Most Common Cause of Acute Sinusitis

The majority of acute sinusitis infections start with a common cold.

As you probably know, a virus causes a cold, and colds are incurable.

The reason? There are over 200 known cold viruses that are constantly mutating. This makes it virtually impossible for scientists to develop a successful anti-viral treatment for the upper respiratory tract.

In addition to that, unlike bacteria, viruses do not respond to antibiotics.

A common cold usually lasts a week or so and disappears on its own - whether you take palliatives to relieve the symptoms, or not.

However, during a cold, bacterium attacks the mucous membrane protecting both the nasal and the narrow sinus cavities. This in turn causes inflammation and swelling.

Most people harbor bacteria such as Streptococcus Pneumoniae and Haemophilus influenzae in the nose and throat. Under normal conditions, these bacteria are harmless and cause no problems, however, there's an 'X' factor:

With a cold, people tend to sniff and blow their noses often, and this triggers a chase-your-tail cycle.

Because the narrow sinus passages are constricted, this repetitive action creates a pressure difference between the sinus cavities and the outside air.

And that's where the trouble starts.

The pressure imbalance tends to squeeze some of these bacteria through the restriction and into one or more of the sinus cavities, where it is trapped.

Since the sinuses fail to drain properly, the bacteria then uses the captive residual fluid as nourishment and they start to multiply rapidly.

The newly spawned bacterium then attacks the lining. The mucous membrane swells further, secreting extra mucus and puss, and this in turn causes more internal pressure...

But it doesn't end there.

Extra mucus causes people to step to their nose-blowing activity, and this simply escalates the pressure build-up inside the sinuses.

An acute sinusitis attack, followed by a debilitating sinus headache.

People who react to allergens and pollutants that affect the nose (commonly called Hay Fever) often suffer from an acute sinus infection without actually having a cold.

This happens because the allergens or pollutants attack both the nasal and the sinus mucous membranes causing them to swell.

People with hay fever also tend to sneeze a lot.

On occasions when in company, they may try to suppress a sneeze out of politeness.

A suppressed sneeze causes an explosive pressure build-up inside the nasal cavities. Also, as with a cold, hay fever suffers tend to sniff and blow their noses often, so the chain of events described above is replicated, guaranteeing a vicious sinus attack.

These conditions also apply to a lesser extent, to people with abnormal anatomic variations inside the nose, such as a deviated septum that restricts the nasal passages.

The presence of sinus polyps growing in the nasal passages is another cause of blockage, whether the patient has anatomic anomalies or not.

Although the human body is naturally resistant to fungus, on rare occasions and under certain conditions, this can also cause allergic fungal sinusitis.

The most common example is with asthma sufferers and people who are immunocompromised (have a reduced immune function). In particular, diabetes sufferers.

Normally harmless fungus such as Aspergillus (commonly found growing on dead leaves, compost heaps and other decaying vegetation), can take on the characteristics of a specialized sinus fungus for this susceptible class of sufferers.

The above class of people are also susceptible to a rare disease called invasive fungal sinus.

This is a deadly disease that carries a mortality rate of over 50%.

Another group of sufferers are immunocompromised (people with immune deficiencies) brought about by ailments such as HIV, AIDS, leukemia and diabetes, together with people suffering from cystic fibrosis.

These unfortunate people are prone to sinus attacks, whether fungus is present or not.

Note: Many health experts consider acute sinusitis to be an infectious disease.

The cause of repetitive sinus attacks is largely unknown, however recent studies have shown that the condition often occurs in diabetics and people suffering from asthma.

Since most diabetics and asthma sufferers also have allergies, researchers believe that the two conditions are linked. In these cases, many people who present symptoms of chronic sinusitis may in fact be suffering from allergic fungal sinusitis.

Like acute sinusitis, other causes of chronic sinus may be due to a primary immune deficiency disorder or HIV infection, as well as cystic fibrosis and nasal anomalies such as a deviated septum or abundant sinus polyps.

Unlike acute sinusitis, chronic sinus is not thought to be an infectious disease.

Back to the top